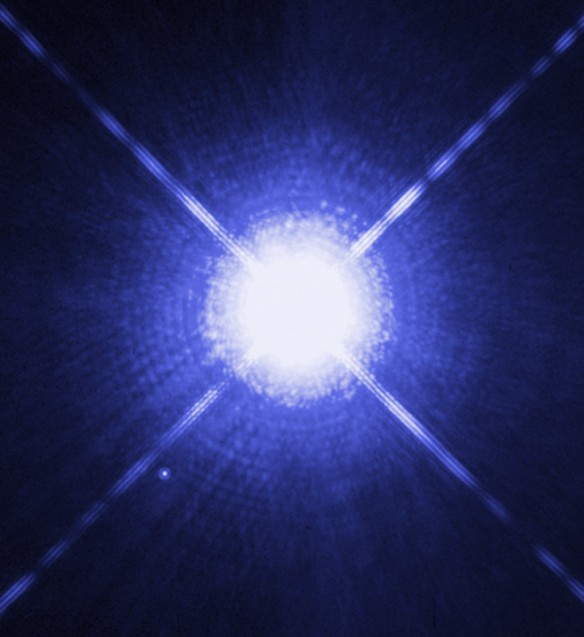 Accurately determining the masses of white dwarfs is important to understanding stellar evolution. The Sun will eventually become a white dwarf. White dwarfs are also the source of Type Ia supernova explosions. The method used to calculate a white dwarf’s mass relies on a prediction from Einstein’s theory of General Relativity—that light loses energy when it attempts to escape the gravity of a compact star. This effect is known as the gravitational redshift.

The Hubble image above shows Sirius, the brightest star in our nighttime sky. The bright blob in the center is Sirius A. The dim spot at around 7 o’clock is A’s white dwarf companion star Sirius B. The image of Sirius A was overexposed so that dim Sirius B  could be seen. The X-shaped diffraction spikes and concentric rings around Sirius A and the small ring around Sirius B are artifacts produced within Hubble‘s optical and imaging systems. The two stars revolve around each other every 50 years. Sirius is only 8.6 light-years from Earth, making it the fifth closest star system known.

White dwarfs are the leftover remnants of stars similar to the Sun. They have exhausted their nuclear fuel sources and have collapsed down to a very small size. Sirius B is about 10,000 times dimmer than Sirius A. It’s very faint because of its tiny size, only about 12,000 km in diameter. Sirius B’s weaker light makes it a challenge to study, because its light is swamped in the glare of its brighter companion as seen from telescopes on Earth. Hubble‘s Imaging Spectrograph was able to isolate the light from Sirius B and was able to resolve light from Sirius B being stretched to longer, red-shiftedr wavelengths by the white dwarf’s gravity. Based on those measurements, astronomers have calculated Sirius B’s mass at roughly 98 percent that of the Sun. Further analysis of the star’s spectrum showed that its surface temperature is about 25,000 K.

A team of astronomers using the Hubble Space Telescope has found a star system that may have left behind a “zombie star” after an unusually weak supernova explosion. A supernova normally obliterates the exploding white dwarf, and the star effectively dies. Scientists believe this faint supernova may have left behind a surviving portion of the dwarf star—a sort of zombie star. The two inset images show before-and-after images captured by Hubble of Supernova 2012Z in the spiral galaxy NGC 1309. The white X at the top of the main image marks the location of the supernova in the galaxy.

Pay no attention to the bright star in the center of the picture. The really interesting stellar object in the frame is that blob of red near the bottom. It’s a small white dwarf undergoing a helium flash.

Normally, the white dwarf stage is the end of the life cycle of a low-mass star, but in some rare cases, a star reignites in a helium flash and expands to its previous red giant state. When this happens, huge amounts of gas and dust are ejected before the star shrinks to become a white dwarf again.

A helium flash is a dramatic and short-lived series of events, and this star—Sakurai’s Object, named for the Japanese amateur astronomer who discovered it in 1996—has allowed astronomers a rare opportunity to study a helium flash as it occurred.