One of the benefits of following The Saga of Team Kimberlin has been the friendships that I have developed with my various codefendants, some of whom I got to know before we were sued and I was simply covering the First-Amendment-related story of The Deadbeat Pro-Se Kimberlin’s use of lawfare to punish people who told the truth about him. Stacy McCain is one of those friends, and the TKPOTD from four years ago today dealt with TDPK’s foolish attempts to out-crazy Stacy.

Back in June of 2014, Judge Hazel ordered The Dread Pro-Se Kimberlin to serve copies of the Second Amended Complaint in his Kimberlin v. The Universe, et al. RICO Madness on all the defendants. He never bothered to serve Aaron Walker, Stacy McCain, Ali Akbar, the National Bloggers Club, or me during the 120 days allowed for service.

Aaron and I have been proactively engaging with TPDK and his court filings. Stacy elected to wait until he was served with the intention of responding within the 14 day window after service. TDPK never served him, so Stacy never responded.

Brett Kimberlin tired to outcrazy Stacy McCain while he had him on the witness stand during the Kimberlin v. Walker, et al. trial. He failed miserably, but he didn’t learn his lesson.

He’s now seeking a default judgment against Stacy when, as Stacy so ably put it “Plaintiff hasn’t even bothered to provide a bad forgery of such alleged service.” Federal Rule of Civil Procedure 4(m) failure to serve within 120 day is grounds for mandatory dismissal. Also, TDPK was ordered by the Court to effect service. Failure to obey that order is grounds for dismissal under Rule 41(b).

All TDPK had to do was mail Stacy a copy of the SAC.

All Stacy had to do was wait.

One of the things that trips up Brett Kimberlin time and again is his inattention to details. The TKPOTD from five years ago cites one example.

Here’re the damages that The Dread Pro-Se Kimberlin is seeking in his Kimberlin v. The Universe, et al. RICO Madness.

There are several things wrong with that. First, consequential damages are awarded for the failure of a party to meet a contractual obligation. I have never entered into any contract with Brett Kimberlin, and, so far as I know, neither have any of my co-defendants. Even if he could prove his case, he wouldn’t be entitled to consequential damages.

Upon reflection, comparing Brett Kimberlin to a Yugo is unfair, and I herby apologize to Yugo.

One of the reasons that Brett Kimberlin has failed at so many of his undertakings is that he suffers from delusions of adequacy. I seems to think the he’s smarter than the average bear, but his lack of forethought results in his being caught, and he tells the flimsiest lies to try to cover things up. Consider, for example, the lie debunked in the TKPOTD from five years ago today.

This is from The Dread Pro-Se Kimberlin’s omnibus opposition to the motions to dismiss his Kimberlin v. The Universe, et al. RICO Madness.

youth n. \ˈyüth\ : the time when a young person has not yet become an adult.

Brett Kimberlin’s first felony conviction was for perjury when he was 19 years old. That might be stretched to qualify as during his youth, although a 19 year old is legally an adult. It’s not a series of crimes.

He was convicted of a series of crimes beginning in 1979 with his drug smuggling conviction. He was 25 years old, old enough to serve in the House of Representative, and clearly not a youth.

Brett Kimberlin is one of the clumsiest liars I have ever dealt with. He makes Joe Isuzu seem to be a pillar of probity.

It’s pretty obvious that Brett Kimberlin fancies himself as well over the the righthand side of the intelligence bell curve. For someone who thinks of himself as a smart guy, he sure makes a lot of dumb mistakes. The TKPOTD from five years ago dealt with one particularly stupid claim he made in a filing in the RICO Madness LOLsuit.

Brett Kimberlin is a whiner. A couple of years ago, I reviewed one of his CDs and noted the naturally whiny quality of his voice. (Mrs. Hoge thinks he sounds like Eddie Haskell.) That whiny nature carries over into the writing of his various court papers. He sent a letter to Judge Hazel complaining that Aaron Walker and I had publicized his seeking permission to file a preliminary injunction against us. He also was upset that we had exposed more inconsistencies in his claims about service of process, the actual Certified Mail green cards, and postal record. Apparently, The Dread Pro-Se Kimberlin believes that he is entitled to have his vexatious Kimberlin v. The Universe, et al. RICO Madness conducted away from any public scrutiny.

TDPK has a bit more than a month before his omnibus response to the eleven (so far) motions to dismiss is due. It will be interesting to see if he can keep his paperwork within the 50 page limit required by the judge’s order. I also look forward to seeing if The Dread Pro-Se Kimberlin’s filing is as legally off-key as The Dread Performer Kimberlin’s singing.

The Deadbeat Pro-Se Kimberlin brought his opposition to our motions to dismiss in at exactly 50 pages. It relied on lies and innuendos to spin a false narrative which didn’t support his case. As a result only one count survived against one defendant, and that was disposed of at the summary judgment phase.

It took a while, but everything proceeded as I had foreseen.

To borrow some words from a song from the ’60s,

I was checking out the Justice Through Music Project website, and I noticed that the DONATE buttons were gone. That struck me as odd. I went over to the Protect Our Elections website, and it’s donate page was still up and functional. It also still had the claim that the donation was being made to a 501(c)(3) entity and was tax deductible. Protect Our Elections/EMPR has never been recognized as a 501(c)(3) charity by the IRS. Until recently, it was recognized as a 505(c)(4) not-for-profit, but its status was revoked for failure to file the required paperwork for over three years. In any case, (c)(4) organizations don’t pay taxes, but donations to them are not tax exempt, so they claim that donations to POE/EMPR are deductible is simply wrong.

It becoming apparent that Kimberlin is pay the same attention to his not-for-profits as he used to. It’s almost as if something else is distracting him.

BTW, when The Deadbeat Pro-Se Kimberlin sued me and my codefendants in the Kimberlin v. National Bloggers Club, et all. (I) RICO Madness LOLsuit, he accused us of operating a false 505(c)(3) as a scam.

Can you say “projection”?

Alinsky’s Rule 5 states that ridicule is man’s most potent weapon. It has certainly been effective in countering some of the bizarre fabrications that Brett Kimberlin has included in the LOLsuits he’s filed to try to silence truthful reporting by his critics. The TKPOTD from five years ago today took a look at one use of pointage, laughery, and mockification in one response to a filing by The Deadbeat Pro-Se Kimberlin in the RICO Madness LOLsuit.

The Dread Pro-Se Kimberlin writes some of the most amazing nonsense in his various court filings. Earlier this year, he filed something he called “Plaintiff’s Response to Defendant Hoge’s Two Latest Filings” in the Kimberlin v. The Universe, et al. RICO Madness. It’s something of a favorite of mine because of its utterly unhinged nature. Here’s a sample:

My reply to that one paragraph ran for about two-and-a-half pages. Here are the beginning and end paragraphs of that reply: 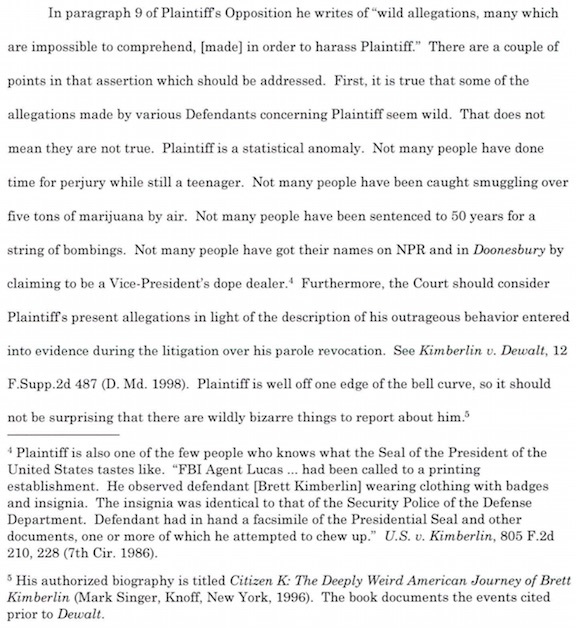 And of course, Kimberlin’s case against me was dismissed in part for failure to state a claim upon which relief could be granted and in part for improper venue when the federal court refused to consider his state law claims.

I’ve been a defendant in two RICO LOLsuits filed by The Deadbeat Pro-Se Kimberlin. The TKPOTD for three years ago today, dealt with his first RICO suit which was filed almost three decades before he sued me.

In January 1987, in federal court in Madison, Wisconsin, Kimberlin sued Crest Paragon Productions, alleging false advertising, breach of contract, mail fraud, conspiracy, and violations of the Racketeer Influenced and Corrupt Organizations Act (RICO). According to the complaint, instead of thirty magazines and sixteen books Kimberlin expected when he responded to a back-of-the-book advertisement placed by Crest Paragon, he was sent “fifteen pamphlets and three paperback books of low quality.” He described this material to me as “real old four-by-six black-and-white pictures that looked like they were from the 1960s and came from England.” The tepid paperbacks had titles like Making a Score and Coed Cohabitation. When Kimberlin wrote a letter demanding the material he had originally ordered, the defendant had the temerity to offer instead “sexual aids,” including, Kimberlin noted, “a live-size inflatable doll, dildos, and a vibrating plastic vagina.”

Though Kimberlin felt conflicted because “I could have made a fortune on that stuff inside prison if it wasn’t contraband,” mainly he felt compelled to sue. He asked for compensatory and punitive damages totaling $150,000. After “a fucking Reagan appointee” dismissed the suit on procedural grounds, Brett appealed to the Seventh Circuit but was told he’d have to pay an additional filing fee. “I decided at that point I’d spent enough on this,” he said. “So I just blew if off.”

So far, it looks like he’ll be three for three.

Most of the Kimberlin v. The Universe, et al. RICO Madness LOLsuit had been dismissed for failure to state a claim when that TKPOTD was written. The remaining count became the Kimberlin v. Frey RICO Remnant LOLsuit. Kimberlin lost that case at summary judgment, and he lost all the related appeals.

A year and a day after the post was published, TDPK filed another RICO suit, Kimberlin v. Breitbart Holdings, et al. That suit was dismissed because his complaint violated the court’s protection order in the Frey case. Kimberlin appealed and lost that appeal also.