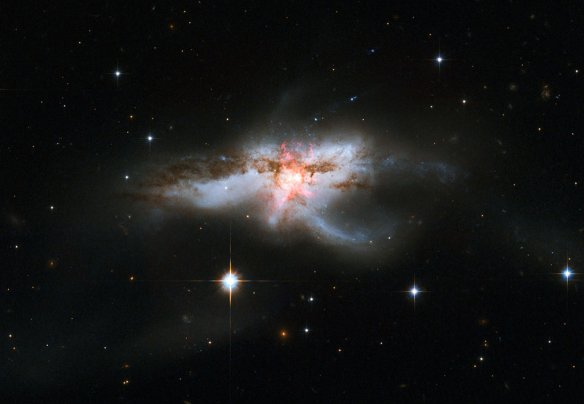 NGC 6240 is a cosmic catastrophe in its final throes. It’s a titanic collision of galaxies throwing distorted tidal tails of stars, gas, and dust and undergoing massive bursts of star formation. The two supermassive black holes in the original galactic cores will also coalesce into a single, even more massive black hole. Eventually, only one large galaxy will remain.

The Local Void is a vast, empty region of space adjacent to the Local Group, the group of galaxies that included our Milky Way. It’s composed of three separate sectors which are separated by bridges of “wispy filaments” of gas and dust. The exact size of the Local Void is unknown, but it is at least 150 million light-years across—and possibly 3 to 6 times larger still. It’s called a void because it has significantly fewer galaxies than expected from standard cosmology.

The irregular dwarf galaxy in the foreground of the picture is cataloged as KK 246, and it’s one of the few galaxies in the Local Void.

This animation takes us on a virtual journey through a couple of nebulae in the Large Magellanic Cloud. It was put together with data collected by the Hubble Space Telescope. 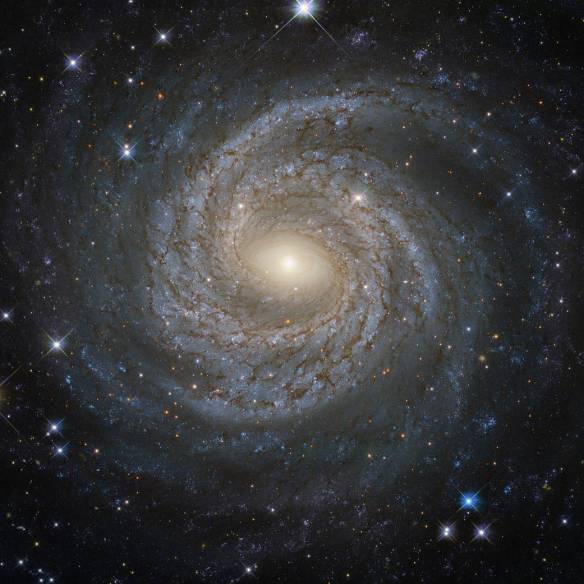 This worth posting simply because it’s pretty.

NGC 6814 is an intermediate spiral galaxy in constellation Aquila located about 75 million light years from Earth. It’s a Seyfert galaxy with an extremely bright nucleus powered by a supermassive black hole with roughly 10 millions times the mass of the Sun. The galaxy is also a highly variable source of X-ray radiation. UV and optical emission also vary, although more smoothly, with time lag of two days behind the x-ray output. 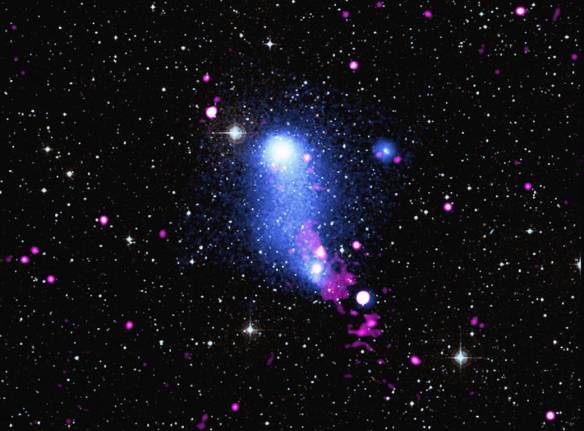 Galaxy clusters are the largest objects in the universe held together by gravity. They can contain hundreds or thousands of galaxies held together in vast clouds of multi-million-degree gas glowing in X-rays.

The system known as Abell 2384 is the result of the collision of a pair galaxy cluster hundreds of millions of years ago. This composite image was put together using x-ray data from the Chandra X-ray Observatory and XMM-Newton (blue) and radio data from the Giant Metrewave Radio Telescope in India (red). It shows the superheated bridge of gas running through Abell 2384 and reveals the effects of a jet from a supermassive black hole in the center of a galaxy in one of the clusters. The jet is so powerful that it bends the shape of the 3 million light-year long gas bridge which has the mass of about 6 trillion Suns.

This image taken by the Hubble Space Telescope shows a population of infant stars in the Milky Way’s satellite galaxy, the Small Magellanic Cloud, located 210,000 light-years away. Some of the stars in the nebula NGC 346 are still forming from gravitationally collapsing gas clouds, and they have not yet ignited their hydrogen fuel to sustain nuclear fusion. The smallest of these infant stars is only half the mass of the Sun. 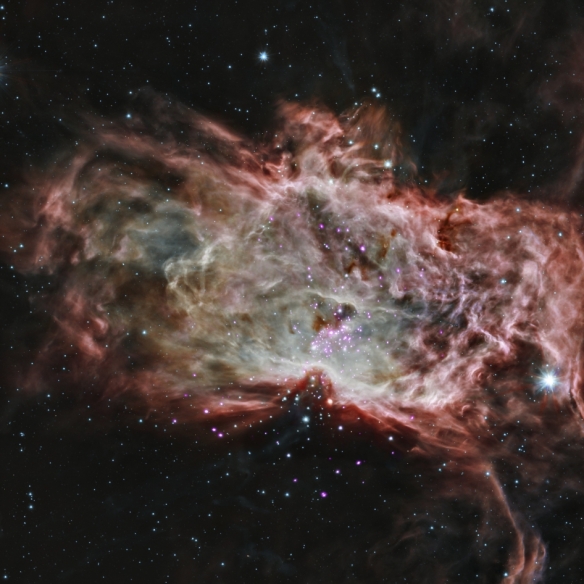 Stars are often born in clusters, in giant clouds of gas and dust. This composite image shows one such cluster, NGC 2024, which is found in the center of the Flame Nebula about 1,400 light years from Earth. X-rays from the Chandra X-ray Observatory are shown in purple, and infrared data from the Spitzer Space Telescope are colored red, green, and blue.

This composite view of the Crab Nebula uses data from the Chandra X-Ray Observatory (blue and white), the Hubble Space Telescope (purple), and the Spitzer Space Telescope (pink). The nebula is the remnant of a supernova that was seen on Earth in AD 1054.

It’s powered by a pulsar, a quickly spinning neutron star  formed when a original star ran out nuclear fuel and collapsed. The combination of rapid rotation and a strong magnetic field in the Crab generates jets of matter and anti-matter moving away from the pulsar’s poles and an intense stellar wind flowing out of its equator.

These thin wisps of gas are an object known as SNR 0519. The blood-red clouds are the remains from a violent explosion of a star as a supernova seen about 600 years ago. The star that exploded is known to have been a white dwarf star—a Sun-like star in the final stages of its life.

SNR 0519 is over 150 000 light-years from Earth in the southern constellation of Dorado (The Dolphinfish), a constellation that also contains most of our neighboring galaxy the Large Magellanic Cloud, a region of the sky is full of intriguing and beautiful deep sky objects. The Large Magellanic Cloud orbits the Milky Way galaxy as a satellite and is the fourth largest in our group of galaxies. 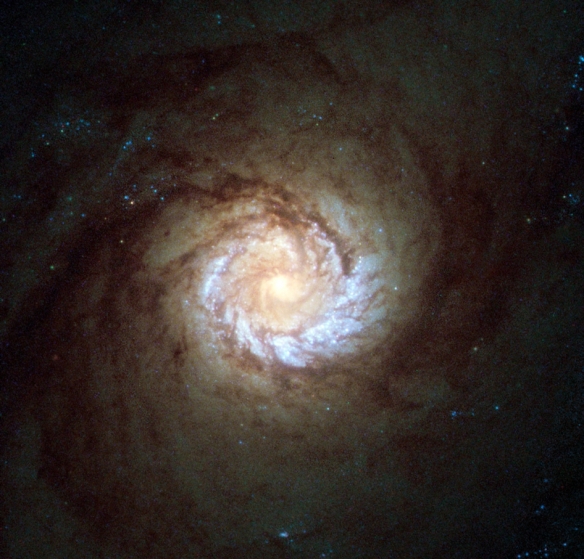 Messier 61 is a type of galaxy known as a starburst galaxy. Starburst galaxies have an abnormally high rate of star formation, hungrily using up their reservoir of gas in a very short period of time (in astronomical terms). However, that’s not the only activity we believe is going on within M61; deep at its heart there is thought to be a supermassive black hole that is violently spewing out radiation.

Despite its inclusion in the Messier Catalogue, Messier 61 was actually discovered by Italian astronomer Barnabus Oriani in 1779. Charles Messier also noticed this galaxy on the very same day as Oriani, but mistook it for a comet.

BTW, I contributed to the design of the power and thermal control systems for one of the instruments on Swift, and the thermal controls for the star trackers in its navigation system.

This 3D animation explores the nebulae NGC 2014 and NGC 2020 which make up part a vast star-forming region in the Large Magellanic Cloud, a satellite galaxy of the Milky Way.

They’re not alive—but they’re dying. The blobs found in the Carina nebula, some of which can be seen floating on the upper right, are probably better described as evaporating. Energetic light and winds from nearby stars are breaking apart the dark dust grains that make the the blobs opaque. The blobs, also known as dark molecular clouds, are often the stuff from which the very stars that later destroy them are made.

Carina is a constellation in the southern sky. Its name is Latin for the keel of a ship, and it was formerly part of the larger constellation of Argo Navis (the ship Argo) until that constellation was divided into three pieces. The Great Nebula in Carina spans about 30 light years, lies about 7,500 light years away and can be seen with a small telescope.  The Hubble Space Telescope image above spans a few light months.

This video simulates the first-ever detection of the aftermath of a planetary collision in another star system. The color-tinted Hubble image on the left is of a vast ring of icy debris encircling the star Fomalhaut, located 25 light-years away. The animated diagram on the right is a simulation of the expanding and fading cloud of the collision’s debris field. It’s based on Hubble observations taken over a period of several years.