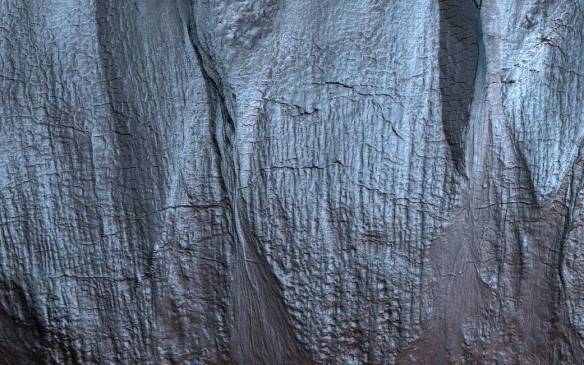 The Mars Reconnaissance Orbiter took this picture of gullies on Mars. They aren’t formed by water but by carbon dioxide frost.

These animations shows three views of the Martian moon Phobos as viewed by the Mars Odyssey orbiter. The apparent motion is due to movement by Odyssey’s camera, Thermal Emission Imaging System (THEMIS) rather than moon.

Each of the three panels is a series of images taken on different dates (from top to bottom): 29 September, 2017; 15 February, 2018; and 24 April, 2019. Deimos, Mars’ other moon, can also be seen in the second panel. These are visible light images, but THEMIS is mainly used for thermal-infrared scans.

The InSight lander used its Instrument Deployment Camera on the end of its robotic arm to image this sunset on Mars on 25 April, 2019. The image has been color-corrected to more accurately render the view as the human eye would see it.

Mars has two small moons. Phobos, which is about 11.5 km across, was imaged on 26 March, 2019, as in moved across the face of the Sun from Curiosity rover’s post of view. Deimos, which is only about 2.3 km across, was 17 March. Phobos doesn’t completely cover the Sun, so Curiosity saw what could be considered an annular eclipse. Deimos is so small compared to the disk of the Sun, astronomers would say it transited the Sun.

Bonus GIF—This series of images shows the shadow of Phobos as it sweeps over Curiosity and darkens the sunlight near sunset on 25 March.