I’m booked from 8:20 to 8:40 this morning on Fault Lines Radio with Garland Nixon and Lee Stranahan,

I’m scheduled to be on Fault Lines with Garland Nixon and Lee Stranahan at 7:20 ET this morning to discuss the Nunes v. Twitter, et al. lawsuit and the health of the Twitter platform.

… and talking with my friend and former codefendant Lee Stranahan.

The link in the tweet takes you to the start of the show. I’m on for the second 20 minutes. https://www.pscp.tv/stranahan/1dRKZOjbXqMGB

In an apparent rush to prove that they have failed to do their due diligence for their client’s case, the lawyers representing Brennan Gilmore in the Gilmore v. Jones, et al. LOLsuit filed this—

They’ve alleged that Lee Stranahan has a Texas Driver’s License and state in footnote 1 that he hasn’t denied having one. Lee is legally blind. He doesn’t have a driver’s license.

Almost every lawyer that I’ve discussed this case with views the behavior of Gilmore’s lawyers, especially their lack of due diligence, as sanctionable.

I finally got around to reading everything on Sore Loserman Bill’s latest rabid response website (No, I won’t link to it.), and I found this scan of a page from Lee Stranahan’s Application for Statement of Charges which Schmalfeldt thinks is “evidence” of Aaron Walker’s practicing law in Maryland. 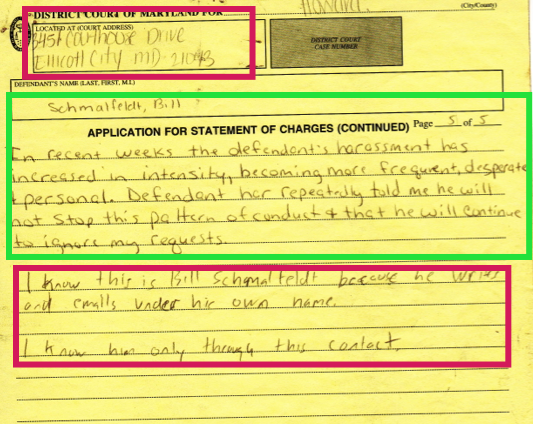 He makes a big deal of “handwriting analysis.” Gentle Reader, let me analyze it for you based on my eyewitness recollection of what happened at the District Court Commissioner’s office.

First, the writing in the green box is the handwriting I saw on the Application when it was shown to me earlier in the evening. This is clearly what was written in Texas. It is very definitely not Aaron Walker’s handwriting; it is legible.

Second, IIRC, the writing in the upper red box is that of the Commissioner. The Commissioner added the address of the appropriate court when she accepted the forms.

Third, IIRC, the writing in the lower red box belongs to Lee Stranahan. He added it to provide clarification of points raised by the Commissioner.

Of course, I am willing to testify to my recollections under oath.

Bill Schmalfeldt At the moment, all Mr. Hoge is doing is throwing more gasoline on the fire. The threats and intimidation will not play well.
6:52 PM – 29 Jun 13

Let me get this straight. It somehow threatens or intimidates Bill Schmalfeldt for me to be willing to testify under oath concerning what I saw. I understand that it undermines his cause to have an eyewitness to an event he wishes to speculate about come forward with testimony, but how does that threaten him? What about the truth intimidates him?

UPDATE 2—”P. Diddy” (byebyebastards@fu.net, 198.245.61.101) has attempted to make a thuggish comment reminiscent of the writings of a harasser of the Stranahan family. I hope he didn’t wake his wife when he sent the comment at 2:25 am, Sunday morning.

To summarize the week’s events so far:

During the early morning hours of Wednesday, a District Court Commissioner reviewed the filing and, based on the information presented, issued a summons to Bill Schmalfeldt on a 3-805 charge, and she added an additional charge of harassment (3-803) as well.

Today, the Howard County Sheriff served the summons on CBBS. There are more details here.

Lee Stranahan is now the complainant in the case and, as such, is not able to discuss the matter in great detail. He has posted this statement. Stacy McCain, OTOH, is under no such restrictions. His initial comments are here. Aaron Walker has a lawyerly analysis here.

As near as I can tell, he’s spent the weekend in Steubenville, Ohio, where he’s been doing a first-rate job of debunking the outrageous lies being told about a rape case, the people involved, and the whole town.

As Mr. Stranahan has noted, there seems to be some sort of tie between the Anonymoids harassing Steubenville and Team Kimberlin. Cabin Boy Bill Schmalfeldt’s fascination with Lee Stranahan has led him to make all sorts of unsupported claims—the most recent being that Mr. Stranahan was not, in fact, in Steubenville this weekend.

Now, I don’t know of my own personal eyewitness knowledge that Mr. Stranahan went to Ohio this weekend. However, I’ve had a communication from a trustworthy person claiming to have paid for Mr. Stranahan’s airline ticket. Moreover, I’ve found Lee Stranahan to be truthful. CBBS, OTOH, is routinely found to be factually challenged.

CBBS and his followers and sock puppets are all over Twitter demanding that someone prove where Lee Stranahan was today. That’s nonsense. They are claiming that he wasn’t where he said he was. They are making an accusation. They are obliged to prove it.

Either offer proof, not innuendo, but proof, that Lee Stranahan was not in Steubenville, or shut up.