This Hubble image shows a massive galaxy about 4.6 billion light years away. Around that galaxy’s border are four bright arcs. They are images the same distant galaxy nicknamed the Sunburst Arc. The Sunburst Arc galaxy is almost 11 billion light-years away. Its light is lensed into multiple images by gravitational lensing of the nearer galaxy. The Sunburst Arc is one of the brightest lensed galaxies known, and its image is visible at least 12 times within the four arcs. 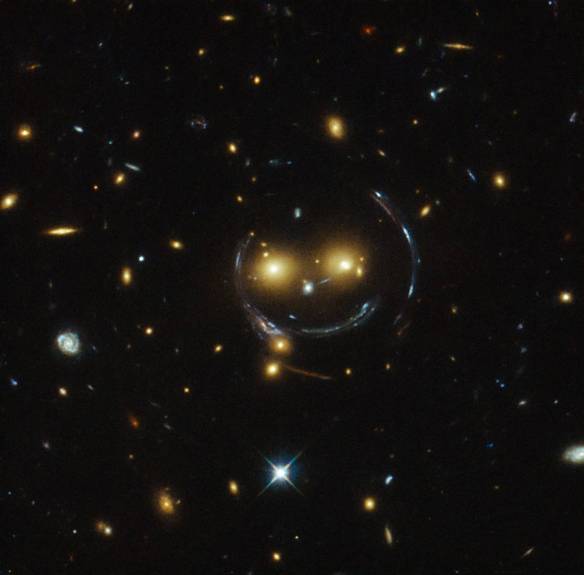 This is is the galaxy cluster SDSS J1038+4849, and it seems to be smiling with its two orange eyes and white button nose. The two eyes are very bright galaxies, and the misleading smile lines are arcs caused by an effect known as strong gravitational lensing.

Galaxy clusters are the most massive structures in the Universe and exert such a powerful gravitational pull that they warp the spacetime around them. They act as cosmic lenses which can magnify, distort, and bend the light coming from behind them. In this special case of gravitational lensing, a ring—known as an Einstein Ring—is produced by this bending of light. The gaps in the ring are a consequence of the inexact and not-quite-symmetrical alignment of the source, lens, and observer.

Icarus, officially know as MACS J1149+2223 Lensed Star 1, is the farthest individual star ever seen. It is only visible because it is being magnified by the gravity lensing of a massive galaxy cluster, located about 5 billion light-years from Earth. That cluster, MACS J1149+2223, shown at left, sits between Earth and the galaxy that contains the distant star. Icarus and its galaxy are 9 billion light-years away. The panels at the right show a view taken in 2011 without Icarus visible and after the star was lensed in 2016.

This animation using Hubble images takes us to a distant galaxy 13 billion light-years from the Earth. In that trip we experience how the light is bent by gravitational lensing caused by a massive cluster of galaxies Abell 2218 (the yellow galaxies), and as we make our return journey, we see how the banana-like stretched images of the galaxies are straightened out and in some cases of a very distant galaxy, bent images merge together into one.