Brett Kimberlin tells lies, but he doesn’t do it very well. Oh, he gets by in the short-term most of the time, but in the long run, he winds up getting caught.

Here’s something he told Judge Jordan during the damages hearing in the Kimberlin v. Allen lawsuit. From p. 99 of the transcript—

And, and he talks about, you know, I haven’t been exonerated. Well, he doesn’t know what happened with the Justice Department lawsuit. He doesn’t know. And, but he goes out and says, I know that he’s never been exonerated and all this stuff. Well, I’m not getting into that here, you know. But I can tell you for a fact, and everybody here, I’m not on parole. I had a 50 year sentence.

I’m no longer serving that sentence. So something happened, and that’s as far as I’m going to go with that.

“I’m not on parole.” As of March, 2013, the United States Parole Commission still had an open file on him.

Kimberlin’s first parole was revoked in 1997, but they let him out again in 2001. In 2006, he successfully completed five years of supervised parole and was released from supervision, but his sentence has not expired.

This most recent tweet (as opposed to a retweet) from the @itstime_2020 account applauds Biden setting up a legal war room. 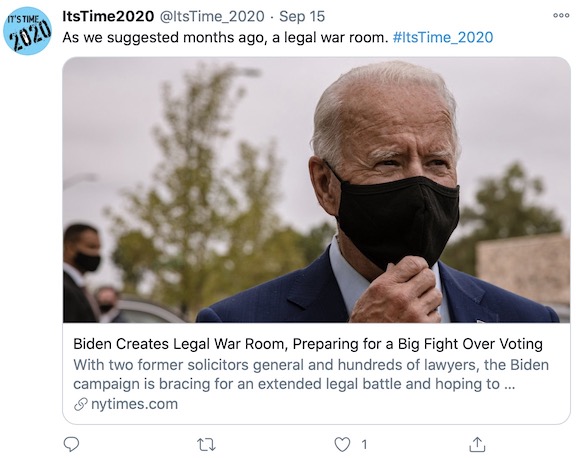 Of course, it now looks as if Biden may need a criminal defense team, something that The Deadbeat Parolee Kimberlin would understand from past experience.

Things aren’t proceeding exactly has I have foreseen, but they’re headed in pretty much the right direction.

This TKPOTD from six years ago today explains how Brett Kimberlin came to be referred to as The Dread Pirate Kimberlin.

Those Gentle Readers who haven’t been following the Saga of The Dread Pirate Kimberlin since last summer may not understand the piracy references. One of the organizations that raised money to help defray the legal expenses for the Virginia and federal Walker v. Kimberlin, et al. lawsuits last year was the Bloggers Defense Team. Team Kimberlin responded with a piracy themed website called the Bloggers Offense Team. I found Kimberlin’s choice of the pirate-related logo at left is interesting. Pirates aren’t semi-sympathetic, comedic characters from a Johnny Depp movie. They are criminals. Was the mask slipping?

That got me to thinking … While Brett Kimberlin’s unconstitutional peace order prohibiting Aaron Walker from blogging about him was in place, I had taken to referring to Kimberlin as Lord Voldemort (“He who must not be named”). Why not a piracy themed nickname? The Dread Pirate Kimberlin. I used it, and it stuck—not only with my readers, but other bloggers began using it occasionally too.

As fans of The Princess Bride know, The Dread Pirate Roberts is a pirate of near-mythical reputation, someone feared across the seven seas for his ruthlessness and swordfighting prowess, and who is well known for taking no prisoners. Ships immediately surrender and give up their cargos rather than be captured, a fate they imagine to be certain death.

The Dread Pirate Kimberlin is more like a legend in his own mind, a pretender who wishes to be feared for his ruthlessness and legal ability and to be known for vanquishing all comers in court. Critics, he thinks, should immediately stop telling the truth about him and give up their First Amendment rights at his command.

No tyrant on any level can handle derision, it deflates them utterly by reducing their stature to its proper level in a way which they cannot escape.

As part of the continuing ridicule of TDPK, his other activities also came under the banner of dreadness—The Dread Pro-Se/Prerormer/Protector/Protestor/Pedo/Publisher/etc.—but as he failed to pay the sanctions and court court due after his campaign of lawyer, Dread became Deadbeat.

He’s now the Deadbeat P______ Kimberlin. The Gentle Reader may insert his word of choice.

Now that Anthony Weiner is back out on the streets (he got time off for good behavior), perhaps he will turn to people who have previously helped him to get reintegrated into society. We know that various members of Team Kimberlin were involved in supporting Weiner through the first Weinergate debacle. It may be that the ex-cons on Team Kimberlin can help Anthony go straight. 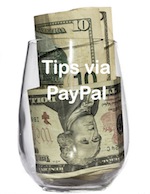