Over at his site promoting his Internet talk show (No, I won’t link to it.), Bill Schmalfeldt whines thus:

When I first started writing for the Daily Kos some years ago, it was a place where diversity was respected.

I’m not much of fan of the Daily Kos myself, but for a bunch of left-wing moonbats they seem a fairly diverse lot. The Kossack’s problem with Schmalfeldt doesn’t seem to be about diversity so much as perversity.

Bill Schmalfeldt had been banned twice at The Daily Kos. Perhaps he thought his third time would be charmed. He posted this on Sunday afternoon: 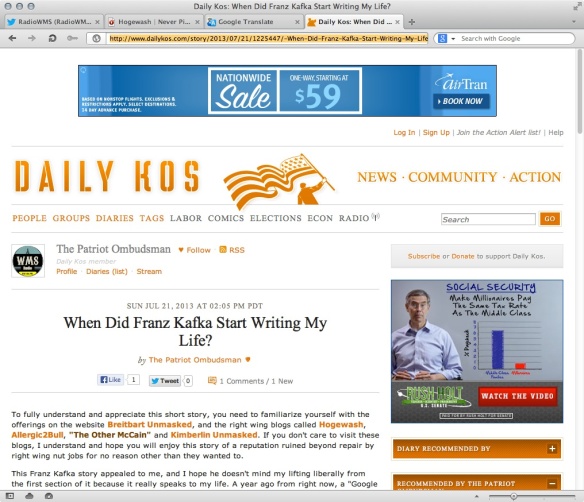 He was not well received, and within hours he was banned. (H/T, @Patterico) Again.

Oh well, the Cabin Boy still has his Internet talk show and his hate sites to keep him busy.

UPDATE—Sore Loserman Bill Schmalfeldt is managed a very rare achievement: He is has created agreement between the Kossacks and Stacy McCain.

The panic over the possible demise of Obamacare following the Supreme Court’s rulings in the several cases next week is beginning to show. Big time. There’s a thread going around the left-half plane of the blogosphere that Justice Thomas should have recused himself from the Obamacare cases because his wife is a lawyer/lobbyist who has lobbied against the law. These same sites, BTW, don’t think that Justice Kagan should have recused herself even though she was a part of the Obama Administration while the laws were being drafted.

Elizabeth Flock has a somewhat straightforward report at U. S. News. Stranded Wind (aka, Neal Rauhauser) posted about Mrs. Thomas’ lobbying over at the Daily Kos about a year ago. He used the post to suggest than Justice Thomas’ vote in Citizens United was influenced by the possibility of his wife benefiting from the decision. He complains that mainline Democrats aren’t taking the fight seriously.

What does make sense is the work Velvet Revolution is doing. Fight the GOP on their own terms? Hell, no! How about their Protect Our Elections campaign? And look at what’s on the front page …

But you had all damn well better get over and donate to Velvet Revolution today.

Send $5 now and if they really can set the Department of Justice on Ginny Thomas it’ll save you $500 in donations in 2012.

The Velveeta Revolution hasn’t been too successful in its opposition to Justice Thomas. After Aaron Walker gets his days in court with Lord Voldemort as the defendant, I wonder if there will be anything left of the Dark Lord’s enterprises.

Justice through blogging. And then the courts.

The Daily Kos has a profile of Lord Voldemort posted. (H/T, Darth Chipmunk) It contains these words:

Kimberlin has been very effective at countering the right-wing hate spewing machine. Robert Stacey McCain (no relation but just as fascist) decided to attack him for his Activism with children for Justice. Lets just say Robert Stacey McCain is on the run these days. Erick Erickson of CNN fame got a nice little knock on the door. Seth Allen get the message as well. This is what Activists do, shutting down hate speech one individual at a time. If Brett Kimberlin can make a difference by himself, we all can.

Are the Kossacks so bought into the “by any means necessary” that they condone, even praise, criminal thuggery so long as it’s aimed toward the Right?

UPDATE—Matt Ross points out in the comments below that almost all of the commenters responding to the Diary I’ve linked to at The Daily Kos are flagging this as a troll. Could be. If so, it violates kos’s published rules for Diaries, specifically, Rules 15 and 16:

So why isn’t it either prominently marked as suspicious or pulled down?