This animation shows a #D rendering of a gas halo observed by ESO’s Very Large Telescope superimposed over an older image of a galaxy merger obtained with ESO’s Atacama Large Millimeter Array. The halo of hydrogen gas is shown in blue, and the ALMA data is shown in orange. The halo is bound to the galaxy, which contains a quasar at its center. The gas in the halo provides the perfect food source for the supermassive black hole at the centre of the quasar.

The redshift on these objects is 6.2, meaning we see them as they were 12.8 billion years ago.

The Atacama Large Millimeter/submillimeter Array (ALMA) has obtained an extremely high-resolution image showing two disks in which young stars are growing, fed by a complex pretzel-shaped filaments of gas and dust. The two baby stars which will likely wind up as a binary system were found in the [BHB2007] 11 system which is part of the clouds of interstellar dust called the Pipe Nebula.

This false color image from the Atacama Large Millimeter/submillimeter Array shows a pair of immense jets of dense gas with near-perfect symmetry radiating from a single source at the center of the picture. They’re coming from an extremely young star—a protostar—that is in the early stages of becoming a star much like the Sun. The baby star, known as CARMA-7, and its jets are located around 1,400 light-years from Earth in the Serpens South star cluster. That dense cluster is home to at least 30 more protostars that are being formed in close proximity to one another. 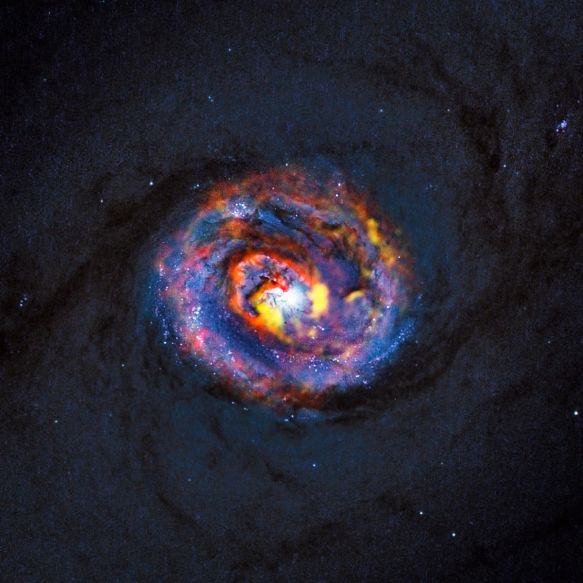 This detailed view shows the central parts of the nearby active galaxy NGC 1433. The dim blue background image, showing the central dust lanes of this galaxy, comes from the Hubble Space Telescope. The other colored structures near the middle of the image are from ALMA observations. ALMA is the Atacama Large Millimeter/sub-millimeter Array, an astronomical interferometer of radio telescopes in the Atacama desert of northern Chile.

This is SS 433, a microquasar located about 18,000 light-years away in the constellation Aquila. This image at submillimeter wavelengths is special because it shows the jets emitted by a hot, swirling disc of material around the black hole at SS 433’s center. The jets’ corkscrew shapes are created by a phenomenon known as precession. The two jets are slowly wobbling about their spin axes in the same manner as a spinning top as it slows down. The corkscrew is enormous—5000 times the size of the Solar System.

Main sequence stars such as the Sun wind up as red giants. Studying red giant stars tells astronomers about the future of the Sun (in a few billion years). It also tells us about how previous generations of stars spread the elements needed for life across the Universe. One of the most famous red giants in the sky is called Mira A, part of the binary system Mira about 400 light-years from Earth.

Mira A is an old star, already spewing out the products of its life’s work into space for recycling. Mira B, Mira A’s companion, orbits A at twice the distance from the Sun to Neptune.

Mira A is known to have a slow stellar wind which gently moulds the surrounding material. Mira B is a hot, dense white dwarf with a fierce and fast stellar wind. Recent observations at millimeter wavelengths show how the interaction of the stellar winds from the two stars have created a complex nebula. The bubble at the centre is created by Mira B’s energetic wind inside Mira A’s more relaxed outflow. The heart-shaped bubble, formed some time in the last 400 years or so, is a relatively young object in astronomical terms.