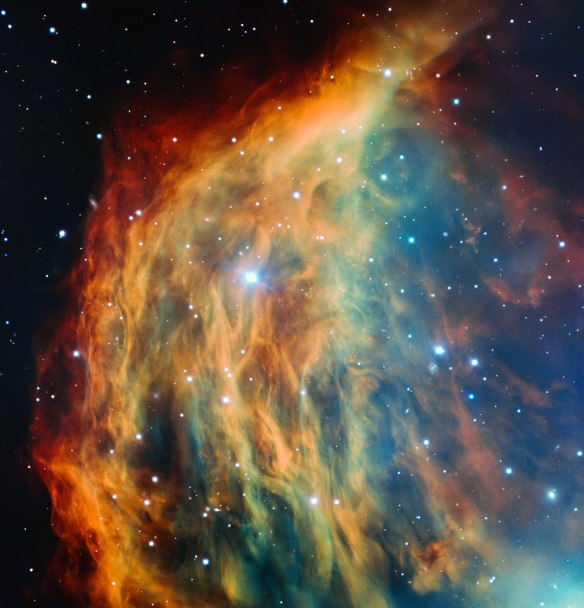 ESO’s Very Large Telescope in Chile captured this image of the Medusa Nebula (also known Abell 21 and Sharpless 2-274). As the star at the heart of this nebula made its final transition into the final stage of its existence, it blew off its outer layers into space, forming this colorful cloud. The Sun will go through a similar process in a few billion years.

NGC 6240 is a cosmic catastrophe in its final throes. It’s a titanic collision of galaxies throwing distorted tidal tails of stars, gas, and dust and undergoing massive bursts of star formation. The two supermassive black holes in the original galactic cores will also coalesce into a single, even more massive black hole. Eventually, only one large galaxy will remain.

The Local Void is a vast, empty region of space adjacent to the Local Group, the group of galaxies that included our Milky Way. It’s composed of three separate sectors which are separated by bridges of “wispy filaments” of gas and dust. The exact size of the Local Void is unknown, but it is at least 150 million light-years across—and possibly 3 to 6 times larger still. It’s called a void because it has significantly fewer galaxies than expected from standard cosmology.

The irregular dwarf galaxy in the foreground of the picture is cataloged as KK 246, and it’s one of the few galaxies in the Local Void.