So many unfortunate events are attributed to global warming (or climate change) these days! However, there are times when any real connection simply falls apart in the face of The Facts. My podcasting partner Stacy McCain has a post looking at the facts behind the origins of the current wildfires in Australia. In many cases, the local warming in Australia is the result of arson.

Various leftists have declared that it is a “conspiracy theory” — a “coordinated misinformation campaign” spread by “climate denial traitors” using Twitter “bots” — to call attention to the role played by arsonists in the Australian brush fires. The facts are still the facts, however, and indisputable facts are never “misinformation.”

Well, yes, but The Facts often conspire with Reality against the Left.

But however mysterious is nature, however ignorant the doctor, however imperfect the present state of physical science, the patronage and the success of quacks and quackeries are infinitely more wonderful than those of honest and laborious men of science and their careful experiments.

On Christmas, Teen Vogue tweeted … oh, read it for yourself— 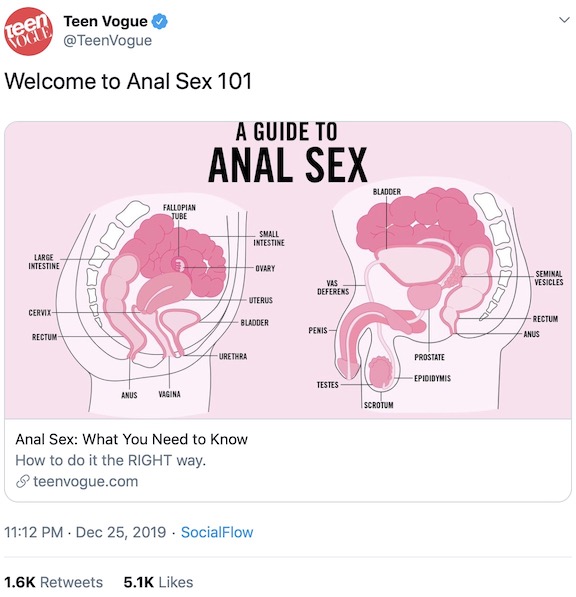 As a species, we humans are evolved to have intercourse in a particular way. Trying to assemble the parts incorrectly may be fun for someone, but a continual desire for infertile sexual encounters is an evolutionary disadvantage that removes one’s genes from the pool.

Of course, that may not be such a bad thing in the case of some science deniers.

While I don’t recommend the third behavior listed in Ms. Rowling’s tweet, I find it … um … interesting that she has been hounded by a Twitter mob (egged on by Vox) for the thoughtcrime of believing settled biological science. 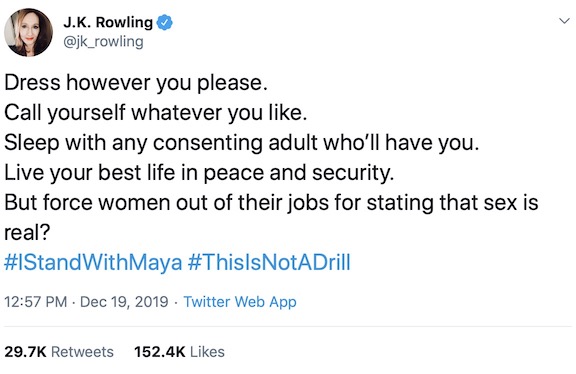 OTOH, I’m so old that I remember when the Left referred to themselves as the “reality-based community.”

The recent influx of emails from Deb Frisch reminded me of post from back in 2012 about Those Who Chose Evil.

Stacy McCain has a provocative post up about the intersection between some forms of mental illness and evil. While I don’t agree with everything he writes, his general trajectory is sensible. Read the whole thing.

When Jesus was asked to sum up the Law, He replied that we are to love God with all our heart, soul, strength, and mind. Then He added a phrase that is more correctly translated, “And you shall be loving those around you as you ideally love yourself.” Not as we actually love ourselves but as we should love ourselves.

There are people who are mad, so completely bonkers, that they truly aren’t responsible for their actions. There are also folks who know right from wrong and who choose evil. Some of these may have a biochemical imbalance in their brain chemistry, but they still know what they are doing and choose not to moderate their behavior.

How do you think Society should protect itself from such people?

One of the claims that The Deadbeat Pro-Se Kimberlin made in his LOLsuits was that people who blogged about him did so in order to increase traffic on their blogs and to attract donations. Well, I write about what I think is important and about less important things that interest me. Although I operate this blog with the intention of turning a profit, some years it loses money.

OTOH, it’s pretty clear that TDPK’s online business model is about raising money. Almost all of the Kimberlin-related websites have some sort of DONATE button or link. This TKPOTD first ran five years ago today. I’ve rerun it before, and it bears rerunning again.

I admire Bono, and not just because he’s a good musician. I also respect the social activism that is grounded in his Christian faith.

The Dread Performer Kimberlin has taken to bad mouthing Bono over at the jtmp dot org website. (I read it so you don’t have to—even though my doing so probably doubles their legitimate web traffic.) You see, Bono wants to help feed the hungry in Africa, and he’s willing to partner with companies such as Monsanto in the process. Monsanto, of course, must be evil because they are a purveyor of GMO seeds. Bono, Brett would have us believe, is “selling out.”

Brett Kimberlin and his organizations oppose “Frankenfoods.” They would prefer to have upwards of a half-million children die each year from vitamin A deficiency rather than have golden rice available in poor countries. They would rather Africans starve than let them plant insect- or blight-resistance corn.

OTOH, poor Asian and African kids aren’t likely to hit a donate button on a JTMP or Velvet Revolution dot US webpage, whereas there may be a few anti-science moonbats who still donate.

Most of the Kimberlin-related sites are now gone and the only one’s with working donation mechanisms are the Protect Our Elections and EuroMaidan PR websites. (The Gentle Reader may remember that Kimberlin change the name of Velvet Revolution US to Protect Our Elections/EMPR Inc. in 2017). It seems that TDPK hasn’t had any more success at online fundraising than he has with lawfare.

The weight of evidence for an extraordinary claim must be proportioned to its strangeness.