While I’m drinking my second cup of coffee this morning, I’m seeing comments on various social media suggesting that one of the things that should happen if blue cities #DefundthePolice is the abolition of security details for elected officials. I doubt that would happen. Indeed, I expect those would be among the very last police details to be cut.

Whether at a local or national level, the whole purpose of being in the Inner Party is to exercise power, and that power is exercised via the Outer Party bureaucracy to keep the Proles in line. The Inner Party will always try to have sufficient resources in place to protect itself and enforce its will, so there will always be a place in the Outer Party for those enforcers. Department A4 of the Gestapo was Protective Services. The KGB had its Close Protective Services directorate.

Outer Party resources may be shifted about, and that may reduce policing of certain activities among the Proles, but the Inner Party will always try to deploy sufficient resources to protect its interests.

No treaty is ever an impediment to a cheat.

There is a maxim, ‘Never put off till tomorrow what you can do today.’ It is a maxim for sluggards. A better reading of it is, ‘Never do today what you can as well do tomorrow,’ because something may occur to make you regret your premature action.

Every strike brings me closer to the next home run.

Laws which are consistent in theory often prove chaotic in practice.

Round up the usual suspects.

The game does not conclude until the woman with the eating disorder ululates.

In general, pride is at the bottom of all great mistakes.

Hell! There ain’t no rules around here! We are tryin’ to accomplish somep’n!

Anyone who isn’t confused doesn’t really understand the situation.

见胜不过众人之所识，非善之善者也。To see victory only when it is within the ken of the common herd is not the acme of excellence.

A man seldom knows what he can do until he tries to undo what he did.

We are guided by interests rather than feelings in dealing with our partners.

President Trump has withdrawn the nomination of Jessie Liu to position at the Treasury Department. According to a post by J. Christian Adams over at PJ Media, the reason for the withdrawal is the President’s disapproval of Liu’s work as the U. S. Attorney for the District of Columbia, and the straw that broke the camel’s back in this case was her office’s sentencing memo for Roger Stone. For lying to the FBI, Democrat senate intelligence staffer James Wolfe who leaked secret data to his girlfriend got 2 months.  Liu’s “career prosecutors” recommended 9 years for the same behavior by Stone.

Adams goes through a long list of biased prosecutions by the “career prosecutors” in Liu’s U. S. Attorney’s office, and concludes—

This was the week that Trump got his sea-legs. He campaigned on draining the swamp, and he has learned how subtle and how sophisticated the swamp is.

Meanwhile, institutionalists, including some Republicans too cowardly to be quoted by name, have gone on record as clutching their pearls at Trump’s actions.  They want the bureaucrats to be unmoored to the executive branch.

The “career lawyers” at the Justice Department did not stand for election and win.  The entire Department should take note.  There is a unitary executive.  Elections matter.  The President ran against the elites who are dispensing biased, sanctimonious unequal justice in Washington D.C.

It shouldn’t surprise anyone that he is keeping his promises.

Given the house cleaning at the National Security Council and the withdrawal of the Liu nomination, I won’t be surprised if there are more vacancies in certain government positions in the near future.

The world is full of willing people, some willing to work, the rest willing to let them.

Well, Lyndon, you may be right and they may be every bit as intelligent as you say, but I’d feel a whole lot better about them if just one of them had run for sheriff once.

El fine si ha a riguardare in tutte le cose. One must never forget to look at the aim of a matter.

Arbores serit diligens agricola, quarum adspiciet baccam ipse numquam. The diligent farmer plants trees, of which he himself will never see the fruit.

In any great organization it is far, far safer to be wrong with the majority than to be right alone. 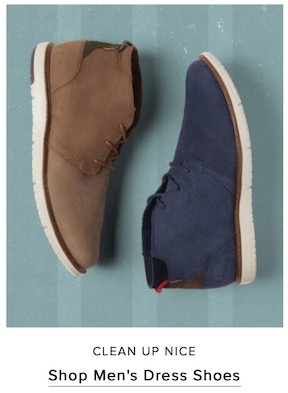 Blake Mycoskie, the founder of TOMS Shoes, is a strong proponent of gun control, and he has spent millions of dollars of company funds pushing universal background checks. Now, creditors are taking control of the company, which has been losing money and was in danger of being unable to pay a $300-million loan due in 2020.

I took a look at the company’s website and found the image on the left. Maybe times have changed more than I realized, but I’m so old that I remember when men’s dress shoes were actually … well … dressy and suitable for wear with formal attire. If the company’s management has this sort of trouble understanding how to properly categorize their own products, I suppose it’s not surprising that they wouldn’t fail to see that sinking corporate funds into virtue signaling on a matter unrelated to the company’s business might not good for its bottom line.

Activity does not necessarily mean life. Quasars are active. And a monk meditating is not inanimate.

Omnium rerum principia parva sunt. The beginnings of all things are small.

The worst thing about mountain climbing is that the easy parts go so quickly.