Lies upon top of lies—that has been Team Kimberlin’s modus operandi. This Prevarication Du Jour from is years ago today is example of how one of Kimberlin’s PR flacks tried to spin on for the Team. 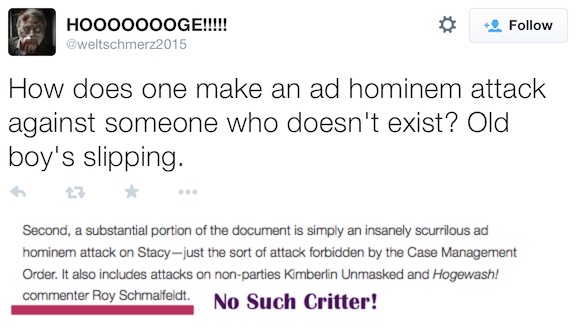 First, Roy Schmalfeldt is real, and it’s his turn to buy lunch next time.

Second, Kimberlin did go after Roy Schmalfeldt in his opposition to Stacy McCain’s motion to dismiss. Here the top portion of Exhibit E from that opposition.

The Cabin Boy™ may be an even worse liar than The Dread Pro-Se Kimberlin.

The Truth never seems to be on Bill Schmalfeldt’s side. He sued Cousin Roy for defamation and wound up dismissing the case with prejudice (on his own!) which effectively was an admission that his case lacked merit. He can never sue Roy again over Roy’s allegation that Bill Schmalfeldt is a rapist.