This episode of Blognet first ran five years ago today. 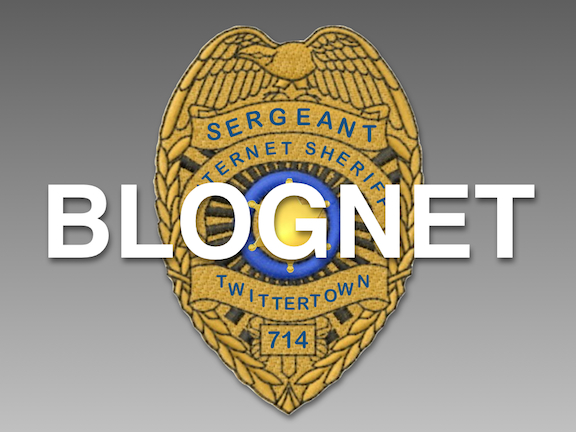 NARRATOR: You’re a Detective Sergeant. You’re assigned to Internet Detail. A cyberstalker has been served with a temporary harassment prevention order, and a final hearing is pending. Your job … get the facts.

FRIDAY: It was Monday, September 28th. It was cloudy and threatening rain in Westminster. We were working the day watch out of Internet Detail. My partner’s Liz Smith. The Boss is Twitter Town Sheriff W. J. J. Hoge. My name’s Friday. It was 9:12 am when I entered Room S-140. The Forensics Lab.

FRIDAY: Hi, Don. Whatcha got for us?

LAB GUY: We’ve been through all of those emails. There don’t seem to be any spoofed headers. It’s our opinion that they’re genuine.

FRIDAY: OK. That helps make the case. What …

SMITH: Sorry. I got delayed at the courthouse. It took them a while to find the files.

FRIDAY: We’re just getting started. Don says the emails appear to be real.

LAB GUY: Uh, huh. We went through all the metadata on the images. The time stamp on the picture he’s most spun up about is consistent with when he says it was taken. Oh, and we now have the serial number of his cell phone.

FRIDAY: Good. That’ll let us verify some other things.

LAB GUY: He used the same Mac to work with all of the images that we’ve reviewed so far. I can’t say anything about the new ones we just got.

SMITH: What about the email timestamps?

LAB GUY: You were right about them. It’s clear that he sent the same image to the people here in Westminster before he sent it to anyone in Massachusetts.

SMITH: So we can prove he’s lying about that as well. Lying is recurring theme with this guy.

FRIDAY: Yeah. With everything else that he’s scrambled, he has to be consistent with something.

MUSIC: Stinger and under.

FRIDAY: Liz and I thanked Don for his work and headed back to our office to put finish writing up our report.

SMITH: I spoke with our guy in Massachusetts. He says he’s got 70 pages of exhibits relating to contacts from The Grouch now that he’s added the evidence we found.

FRIDAY: The judge isn’t going to wade through all that.

SMITH: He knows that. It’s just for reference in case the judge has a specific question. He says that he’s going to try to keep things simple and lay out the basic elements.

FRIDAY: Uh, huh. Knowing The Grouch’s M.O., he’ll try to bring up all sorts of extraneous stuff to try to justify his behavior.

SMITH: If he shows up.

FRIDAY: Yeah. One of his consistent behaviors is failure to appear. Say, wasn’t this guy on some game show years ago?

SMITH: “The Price is Right.” There’s a clip of it on YouTube.

FRIDAY: Well, given his talent, he picked the wrong program.

FRIDAY: He should have done “The Gong Show.”

MUSIC: Up and under.

NARRATOR: On September 30th, a hearing was held in the District Court for Ayer, Massachusetts. In a moment, the result of that hearing.

NARRATOR: On September 30th, a hearing was held in the District Court for Ayer, Massachusetts, to determine whether a final harassment protection order should be issued. Based on the evidence presented the order was issued against The Grouch. Out-of-state restraining orders may be registered with a Sheriff in Wisconsin for enforcement in that state.

This is LBS, the Lickspittle Broadcasting System.

Harassing people by telling lies about them and receiving a dozen restraining orders as a result has been known to have adverse consequences on a reporter’s employment prospects.