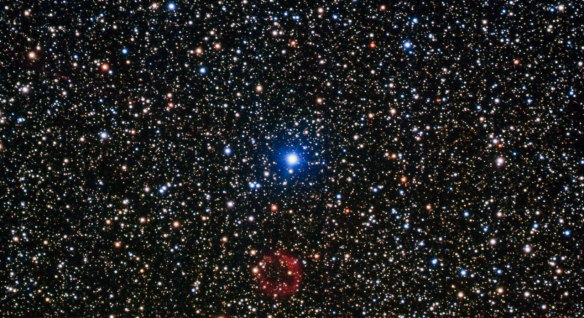 Pay no attention to the bright star in the center of the picture. The really interesting stellar object in the frame is that blob of red near the bottom. It’s a small white dwarf undergoing a helium flash.

Normally, the white dwarf stage is the end of the life cycle of a low-mass star, but in some rare cases, a star reignites in a helium flash and expands to its previous red giant state. When this happens, huge amounts of gas and dust are ejected before the star shrinks to become a white dwarf again.

A helium flash is a dramatic and short-lived series of events, and this star—Sakurai’s Object, named for the Japanese amateur astronomer who discovered it—has allowed astronomers a rare opportunity to study a helium flash as it occurred.