The TKPOTD for one year ago today dealt with Brett Kimberlin’s not-for-profit Protect Our Elections/EMPR Inc.

Now that it seems that The Deadbeat Pro-Se Kimberlin has had his butt kicked in enough LOLsuits, it looks as if he’s tried to make a career change to protecting our elections. He’s renamed VelvetRevoultion.US as Protect Our Elections/EMPR Inc. and is trying to make a go of the role of The Deadbeat Protector Kimberlin. However, he doesn’t seem to be making much impact providing “oversight of elections,” something Protect Our Elections claimed it does in a suit against the Federal Election Commission.

The Protect Our Elections website has so little traffic it can’t be reliably ranked. None of the content posted in 2019 was original. The half dozen posts were lifted from Politico (twice), The Daily Beast, The Rolling Stone, Salon, and the Puffington Host. The last post that appears to contain any original content was about the disputed North Carolina House District 9 contest. I went up last December. Nothing posted in the past year has generated a single comment. Not. A. Single. Comment.

Moreover, The Deadbeat Protector Kimberlin did not properly oversee this week’s special election to settle the NC-09 House election. Brett Kimberlin isn’t doing any better protecting our elections than he did smuggling dope into South Texas. Kimberlin, as Judge Hazel said, “has failed …”

2019 was a rough year for Protect Our Elections/EMPR Inc. On 15 May, 2019, the IRS revoked its 504(c)(4) tax exempt status. Donations to that entity never were tax deductible, but revocation of 504(c)(4) means that POE/EMPR is itself no longer tax exempt. Perhaps that’s the reason why this was allowed to happen. 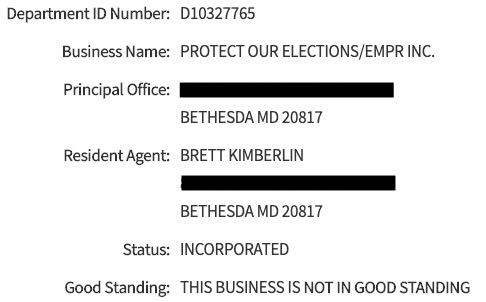 BTW, Protect Our Elections is still a registered trade name belonging to Justice Though Music Project. Kimberlin renewed the registration on 20 January, 2020.

Meanwhile, the @itstime_2020 Twitter account for the current attempt at influencing an election still had no followers as of 10:30 pm ET Saturday.