Several people have asked me for advice about buying a gun. The best general advice I can give on the subject is to take proper firearm safety training (such as the NRA Safety Course or your state’s hunter safety course) prior to buying a gun. In the course of that training you’ll learn material that will help you decide what might work best for you. 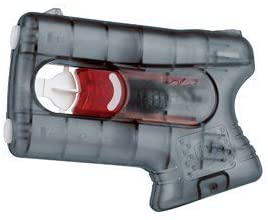 It’s also a good idea to have some kind of “less lethal” (what that term really means is less likely to kill than a firearm, but still dangerous) means of self defense available for use when deadly force isn’t absolutely necessary. One tool that I’ve adopted is the Kimber PepperBlaster II. It looks like a firearm, but it isn’t. It can project a blast of pepper spray and dye about 13 ft, and it holds two charges of spray. It’s available from Amazon.

It’s small enough to slip into a trouser pocket or purse, but I don’t recommend carrying it without some sort of holster which protects the trigger. (Imagine a pepper spray blast going off by surprise in your pocket or purse.) I carry mine in an Uncle Mike’s Size 3 Pocket Holster. It’s an excellent fit.

Remember, force offered in response to an attack should be proportionate to the danger the attack creates. There are times when deadly force is called for, but there are also times when it isn’t. It’s wise to be prepared to respond appropriately.

Finally, check your local laws and obey them.