The TKPOTD from five years ago today contained an image that had been sent to me by Kimberlin Umasked.

It’s May the Fourth … 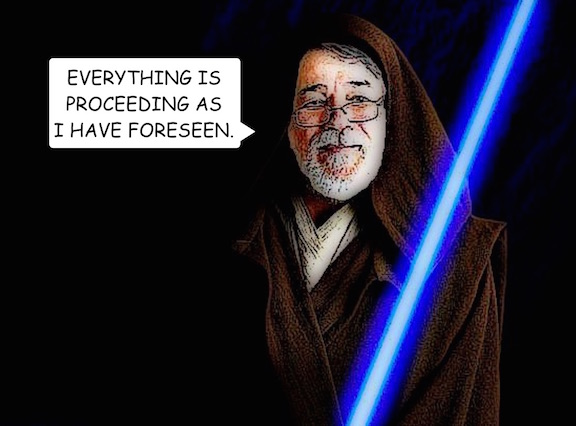 That cartoon got so deeply under Brett Kimberlin’s skin that he questioned me about it when he called me as a defense witness in the Walker v. Kimberlin, et al. lawsuit.

Q   Do you ever post graphics or photos of you as a Star Wars Hero?

A   I have, people have sent me graphics of my face to replace, who’s the guy that played Obi-Wan Kenobi, the older fellow? This is what happens when you’re old. Alec, Sir Alec Guinness with my face instead of Alec Guinness’ as Obi-Wan in, in various cartoons. I think they’re funny, and I’ve, I’ve posted a few that have sent me, and other people have, have picked up on that, as well, and sort of run with it. It’s a, it’s, it’s kind of a running gag now in certain corners of the internet.

The jury’s reaction to that exchange went almost exactly as the Gentle Reader might have foreseen.