Through the years, there’s be an obvious similarity between The Deadbeat Pro-Se Kimberlin and a certain coyote. The TKPOTD from four years ago today took notice. 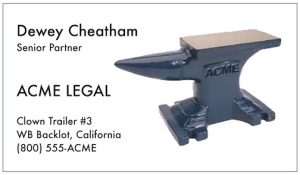 One of the running gags used to make fun of Team Kimberlin’s incompetence at lawfare is referring to them and/or their source of legal advice as “Acme Legal”—meaning a part of the same company that supplies those fine products to Wile. E. Coyote.

Given the amazingly complex theories that underpin some of the claims in The Dread Pro-Se Kimberlin’s allegations, both civil and criminal, against his perceived enemies, there are certain similarities to the Coyote’s plans and contraptions. Certainly, the success rates have been equivalent. And people have fallen into the Cabin Boy’s™ forgery traps at the same rate as the Roadrunner has been caught.