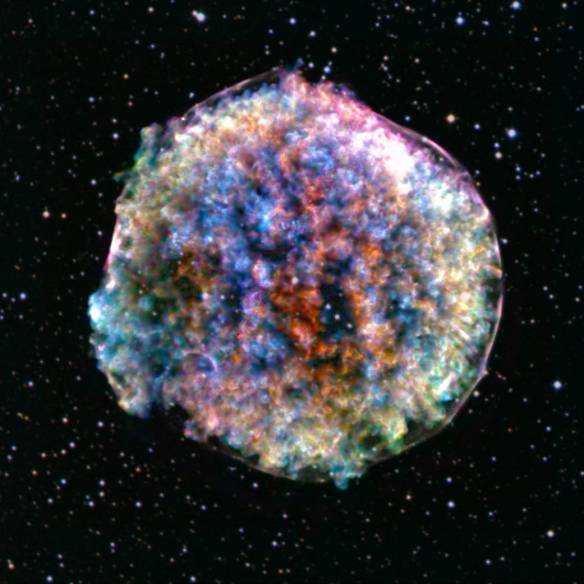 In 1572, Danish astronomer Tycho Brahe was among those who reported a new bright object in the constellation Cassiopeia. We now know that Tycho’s new star was not new at all. It was a supernova, a stellar explosion so bright that it can outshine the light from rest of the galaxy. This particular supernova was a Type Ia, which occurs when a white dwarf star pulls material from, or merges with, a nearby companion star until a violent explosion is triggered. The white dwarf star is obliterated, sending its debris hurtling into space.

This false color image of the remnant of Tycho’s supernova combines from the Chandra X-ray Observatory with optical data from the Digitized Sky Survey. It uses date from two narrow ranges of X-ray energies to isolate material (silicon, colored red) moving away from Earth, and moving towards us (also silicon, colored blue). The other colors in the image (yellow, green, blue-green, orange and purple) show a broad range of different energies and elements, and a mixture of directions of motion.