The TKPOTD from four years ago today was a typical installment in this blog’s continuing pointage, laughery, and mockification of Team Kimberlin.

Team Kimberlin’s abysmal record of predicting the outcomes of their lawfare is a wonderful source of pointing and laughter. Here are some more nonsense tweets from 2013.

The Cabin Boy’s™ 16 October tweet came the day that his motion for a modification of the first peace order (one that would have let him ignore it if he said that he was doing “journalism”) was denied. The tweet contains two errors. First, the state’s highest court is called the Court of Appeals. Second, instead of throwing out the peace order “TOMORROW or Friday,” the CoA threw out the Cabin Boy’s™ appeal the next week.

Very Ordinary Seaman Ferguson reacted to the news of the CoA denying Schmalfeldt’s appeal by opining that I was in bigger trouble because of the Kimberlin lawsuits. While they’ve been a pain in the neck (or a couple of feet lower), they really haven’t caused me any trouble. The Dread Pro-Se Kimberlin gutted his own case through incompetence in the state lawsuit, and he isn’t performing any better in the RICO Madness.

The third tweet is typical of one of the Cabin Boy’s rants trying to justify harassment as activity protected by the First Amendment. No court has bought his line yet. 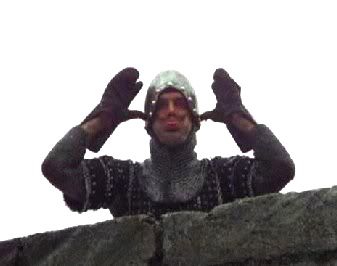