It’s no fun being sued, but it is satisfying when a court throws out all or part of a LOLsuit because it isn’t  based on any recognized cause of action. Several of the counts in The Deadbeat Pro-Se Kimberlin’s original Kimberlin v. Walker, et al. LOLsuit bit the dust at summary judgment because they weren’t things that could be the subject of a lawsuit, and the Hypertechincality Du Jour from a year ago today dealt with a non-tort alleged in The Dreadful Pro-Se Schmalfeldt’s LOLsuit VIII. 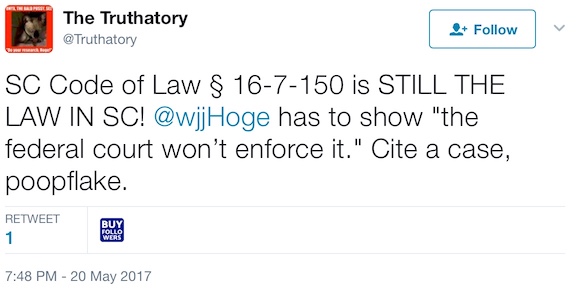 The core of The Dreadful Pro-Se Schmalfeldt’s problem is not that he is trying to use an unconstitutional statute and whether the federal court would enforce it. He has an even more basic procedural issue. He is trying to use a criminal statute as the basis of a civil claim. When a pro se litigant tries that (lawyers never seem to make the mistake), the court throws out the complaint without having to get into the issue of the law’s constitutionality. Here’s what the court said the last time a pro se litigant tried to use § 16-7-150 as the basis for a civil claim—

As I said in today’s TKPOTD, I don’t expect to need my motion to dismiss after the Magistrate Judge reviews Schmalfeldt’s complaint.

Everything is proceeding as I have foreseen.

UPDATE—The Gentle Reader may wish to note that the last time the U. S. District had to rule on a case in which a pro se litigant was stupid enough to try to use the South Carolina’s criminal defamation statute as the basis for a civil claim was for a case filed in 2015. (The first two digits of the case number correspond to the year the case was filed.) So it’s been almost two years since a pro se litigant has filed such an inept defamation case in that court.

After a bit of bluster, the Cabin Boy™ wound up burning his one free complaint amendment in LOLsuit VIII in a failed attempt to remedy that and other errors. As usual, he failed miserably, but that was to be expected. Indeed, everything proceeded as I had foreseen.