Yesterday evening, the Cabin Boy™ took his YouGetNoQuarter Twitter account private again. I’ve lost track of the number of times that he’s run away and hidden from public view.

It must be depressing to believe one must conduct so much of one’s affairs skulking away from the light. OTOH, the urge to hide such a blatantly misleading tweet as the one on the left must be overwhelming.

Of course, the Cabin Boy™ hasn’t completely disappeared from the Internet. He was wasting Dave Alexander’s bandwidth by commenting over at the Craft Blog yesterday evening. 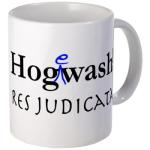 One of the things he was going on about over there was his incorrect notion that he has grounds sue Roy Schmalfeldt over allegations Roy has made about Bill being a rapist. The Cabin Boy™ sued Roy about that last summer, and his suit was dismissed with prejudice. That means that he can’t sue Roy about those allegations again because the dismissal counts as a finding on the merits that what Roy said was not false. IANAL, but if the statements weren’t false before the Cabin Boy™ sued, they still shouldn’t be false if they are repeated now. Res judicata and all that. More important, res judicata applies to any claim that Schmalfeldt might have been able to bring against any of the defendants he named in his Grady, et al. (I) LOLsuit. Again, IANAl, but it seems that the Cabin Boy™ is barred from suing any of those individuals again for repeating anything they said about him before 19 August, 2015, when the suit was dismissed.

The Cabin Boy™ had a right to a day in court with them over those issues, but he waived it by dismissing his suit with prejudice.