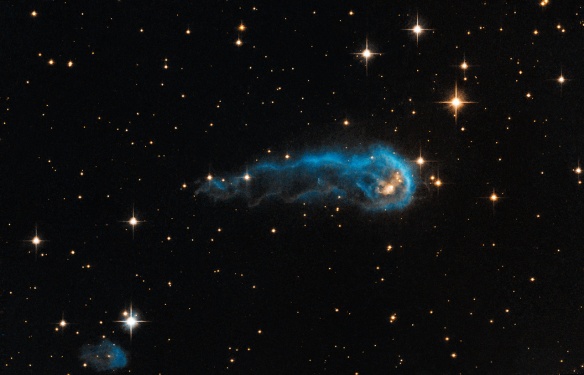 When I was a kid, one of the pleasures of spring was going to the creek and catching tadpoles. This bright blue tadpole seems to swim through the inky blackness of space. Catalogued as IRAS 20324+4057, “The Tadpole” is a clump of gas and dust giving birth to a bright protostar, one of the earliest steps in building a star.

There are multiple protostars in the tadpole’s head; the glowing yellow one in this image is the most luminous and massive. When this protostar has gathered together enough mass from its surroundings, it will become a fully-fledged young star.

The intense blue glow is caused by intense ultraviolet radiation from nearby stars. Pressure from that UV sculpts the tail into a long, wiggly shape. The Tadpole spans roughly a light-year from head to tail-tip, and contains gas with about four times the mass of the Sun.

1 thought on “The Tadpole”