I’ve been invited to Blog Bash during CPAC next week, and I intend to go.

There are rumors that there will be some sort of protest, and one of the sources is a call from First Mate Neal Rauhauser to the venue where the event is scheduled. This leads to a couple of interesting possibilities. Either FMNR has direct knowledge of a potentially dangerous event, or he is lying to try to frighten folks into canceling Blog Bash. (“Nice event you’ve got planned; it’d be a shame if something happened to it.”) Given that a significant number of elected officials plan to attend the event, I suspect that more than one law enforcement agency are taking an active interest in the threat.

The threat against Blog Bash is very similar to the one made against Aaron Walker’s employer that caused Mr. and Mrs. Walker to be fired, but it isn’t effective this time. Team Kimberlin just doesn’t get it. They’ve run up against a wall of bloggers who are determined to keep at the story until they’ve been brought to justice. Oh, it is possible to frighten us, but fear will not deter us.

While writing about the Kimberlin story, I’ve had the pleasure of meeting face-to-face bloggers such as Aaron Walker, Stacy McCain, Wombat-socho, and Lee Stranahan. I look forward to meeting many more next week.

So I’m off to CPAC next week. And Blog Bash.

UPDATE–I am told that The Dread Pirate himself has also called the venue. Hmmmm.

UPDATE 2–Stacy McCain is on the story.

UPDATE 3–The Lid is also following the story. 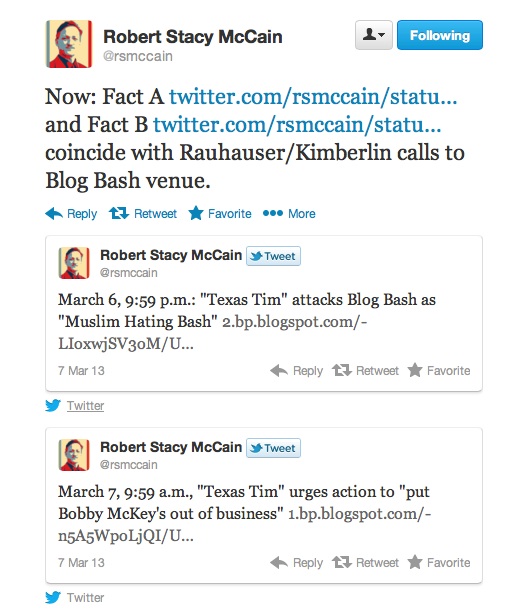