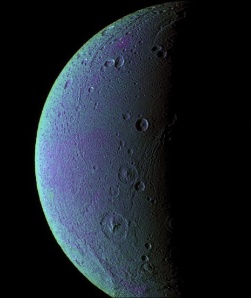 This false color view highlights tectonic faults and craters on Saturn’s moon Dione, an icy world that has undoubtedly experienced geologic activity since its formation.

To create the enhanced-color view, ultraviolet, green and infrared images were combined into a single black and white picture that isolates and maps regional color differences. This “color map” was then superposed over a clear-filter image. The origin of the color differences is not yet understood, but may be caused by subtle differences in the surface composition or the sizes of grains making up the icy soil.

This picture looks toward the leading hemisphere on Dione (1,126 km across). North is up and rotated 20 degrees to the right.

NASA’s Cassini spacecraft has detected molecular oxygen ions around Dione, confirming the presence of a very tenuous atmosphere. The oxygen ions are quite sparse—one for  every 11 cubic centimeters of space or about 90,000 per cubic meter. Dione has an extremely thin neutral atmosphere. At the surface this atmosphere is only as dense as Earth’s atmosphere 480 kilometers above the surface. That’s slightly higher than the orbit of the International Space Station.